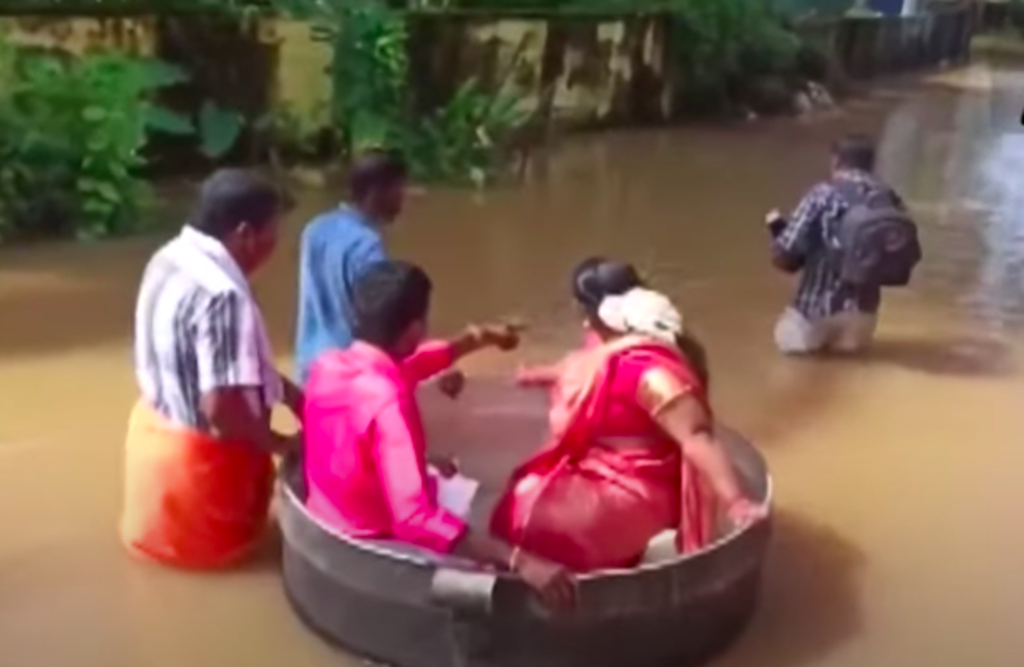 A couple in the flood-ravaged state of Kerala in southern India were determined to marry, even if it meant they had to go to their wedding venue in a giant cooking pot.

The viral video of the couple from Kerala’s Alappuzha district, dressed in their finest wedding attire, shows them navigating the flooded streets sitting inside a huge cooking pot, presumably because they couldn’t get a boat.

The bride and groom, identified only by their first names Aishwarya and Akash, are residents of the towns of Ambalapuzha and Thakazhi respectively. The video shows two men pushing the pot through the muddy water.

A cameraman was also seen wading through the water to capture the couple’s unusual mode of transportation.

The two eventually got married at the local Panayannurkavu Devi temple in the village of Thalavady in Alappuzha, which was also partially flooded.

The bride and groom both work as health workers in Chengannur, in the eastern part of Alappuzha.

Aishwarya told reporters: “It has become a marriage we never imagined.”

Local media reported that the couple gave residents a reason to smile amid the gloom and devastation caused by the massive flooding.

Someone in the crowd joked, “They should have booked a boat instead of a car.”

Dozens of people have died in the floods that inundated Kerala even as rescue efforts continued throughout the weekend. The State Disaster Force said the flooding, caused by a downpour, killed more than 30 people, destroyed 90 homes and partially damaged 702 homes.

Due to the torrential rains, several roads and bridges were also washed away and many people are still trapped inside their homes. Officials say the death toll could rise as many are still missing.

Kottayam and Idukki are two of the worst affected districts in the state, local media reported. These two districts have also experienced deadly landslides due to heavy rainfall.

The Indian Meteorological Department (IMD) on Monday reduced the statewide alert from red to yellow, meaning a lower level of danger, for at least 11 districts in the state.

Several relief centers have opened for people who have been evacuated from their homes due to flash floods and landslides.

Indian Prime Minister Narendra Modi expressed his condolences to the bereaved families after speaking to the Chief Minister of State.

WHO defends delay in approval of Indian vaccine

Minted and Brides team up for an exclusive stationery collection

Create precious moments with a ‘wedding trip’ by The Peninsula Bangkok